I designed the Falcon guitar line in the April of ’06 originally for Eko Guitar company. It was a flashback to the ’60’s incorporated into a modern production guitar, but retaining a vintage vibe and feel in a playable high performance instrument. Eko distributed the guitars for a while but then our agreement was over and production stopped. The Falcon line built by Eko had a relatively good success just among the small niche of players looking for those specific terrible Italian guitars, that despite their overall poor quality, offered a freaky and specific honky and “plastic” tiny tone, desiderable for specific music like surf, roots, psychedelic, techno and grunge.

Then in the Mannedesign project we resumed production of the Falcon in China including various specs and models. I never did actuallly build a Falcon here in the shop except for the first prototype sent to China for reference.

Lemma is a regular visitor here in the shop and after using a customized Trea for so many years it came the time to have a new bass.

The pressure from band , techs and showbiz around him was suggesting that he should use a more straightforward and commonly accepted instrument. (you know how the world spins..) But Lemma said “Personal human relationships and years of trust come first!”. He decided to put me over the coals and stress me to design his perfect bass with elements of a Music Man, an old Precision and a Rickenbacker.

That’s was tough enough! Really challenging. … But I was born for challanges. So we went for the design of the new bass from scratch.

For the shape, after taking a look at the possibilities, I understood that he would be ok with something that brought back the falcon shape mood. So we decided to go for it, working around that shape, and adapting it to a bass version. Balance, measurements and comfort when hanging from a strap were all tested using a trial-and-refine approach.

A medium weight Korina body was selected to match the tone and punch desidered.

We radiussed the top, but with a more pronounced radius than we ever used before.

For electronic it was pretty straight forward with a single precision split-coil pickup.

Then a flame top was desidered to get a ’70’s feel of bindings and a “hi-key” sunburst that had to be vivid.

A pickguard gave a more built-up feel to avoid a desolate naked top.

The headstock was completely reshaped to be more massive and less pointed. I like this new headstok a lot and I am thinking as a option for all future instruments.

Dots? No dots is cool but how can I hit the right notes while jumping in almost total darkness?

The final result left me completely satisfied as the bass is harmonically weighted on all aspects. I like it. It is a departure from standard Manne shapes, into a more traditional field, but well embedded with the Manne philosophy and knowhow.

see bass in the  gallery 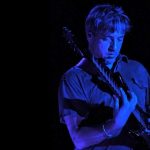 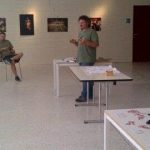