I received my new Manne Ventura in Riccione, the place chosen for band rehersal for the upcoming record and tour of “The King of Metal”, the new release from the ex-Iron Maiden Blaze Bayle.

Just out of the box, the guitar amazed me for the fat tone, yet still unplugged and with an action set for hi-competition!I was already familiar with an 8-string Manne, so I knew what Manne means. But still it is a nice surprise having in my hands such a beautiful guitar built in italy.

After the first touch I ran down the stairs into the studio.

I remained 5 seconds in the clean channel just resisting being too bad…so I did not yet realize that the pickups are wired for serial/parallel selection, and in the central position they create the all famous Strat crying tone!!!

Then, distortion… an incredible smash. Till the day before I was using a Gibson Standard Special LP with EMG 81-85, the Zakk combination. Well… this Manne has something more. More push forward witha better defined sound, cutting thru without being acid, … the definitive weapon for the new Blaze Barley record!!

At this point the Boss came in raising his thumb up saying: “Great sound man!!!” so I replied: “A Manne guitar soundsmuch better than Gibsonor Fender, doesn’t it???”

I switched to the lead channel with more mids, and so its melodic voice came out, with a defined attack and great sustain, even with that so ground-low action…. so very playable.

After half an hour I went back to the clean channel and I finally fell in love with the central position, with both pickupsin parallel mode. A sound for arpeggios I was not hearing for such a long time. Great work!!

In two weeks, from +10 celsius to -5 celsius, snow, heating, humidity changes, I NEVER had to tune it.

So this is the axe I used on the recording and i will use on my next 60 European tour dates. 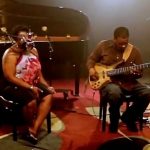 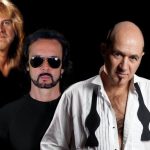