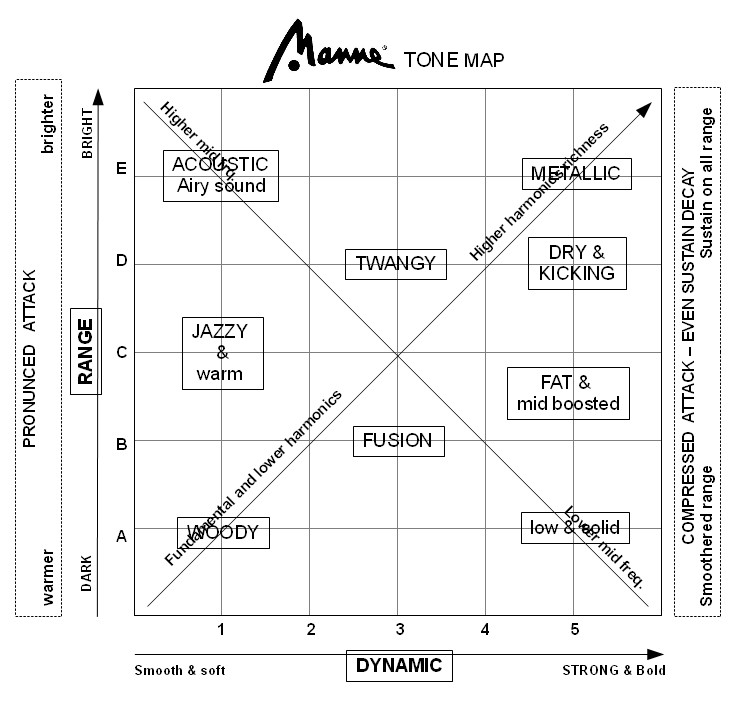 You can help us understanding your preferences placing your desidered tone in the map. You can express the position by coordinates giving the RANGE and the DYNAMIC corrispondent numbers. We will better use this map in the future, we are working on it….

Our recipe for tone is based mainly on three areas:

Each combination will give different dynamic/tone results.

We suggest the use of Headphnes to better appreciate the details.

Bass recorded thru DI input of BAE 1073 preamp, to Apogee Rosetta convertes to file. No compression.

About the Phenolic Fretboard: It’s easy to criticize it and be skeptical about it. But we are not. We have used it since 1988, refining the way to work with it, selecting the right consistency (not all phenolics are the same) that means % of ingredients and getting finally to one point. “The” point. The point that everybody missed helping to create the conviction among some players that phenolic sounds like “plastic”. Well our secret, since 1988, is very simple: reducing the amount of phenolic we reduced the phenolic sound. If you will take a look to our fretboards you will see that the thickness of the fingerboard is similar to the fret tang so the thickness of the fretboard is just the minimum amount needed. So our necks sound much more like maple necks than phenolic. I would say just a little less glassy than all maple necks but with better durability and stiffness. Check them out!

My vision about tone

The sound of an electric stringed instrument is an energy that is delivered from the player to the listener. It follows this path of variable elements that can influence it:

Musician’s Ability: This is the first and more intriguing aspect that is easily seen if in a Show you let many people test the same instrument with same settings and amp. The results are hugely different, not only for artistic expression and execution aspects but also in the tone that is achieved. I strongly believe that even the weight of the player and ambient temperature in some ways affect the tone. But too many uncontrolled variables are at play, some with very little contribution so… enjoy playing in a luckily, difficult to control, quantum physics world!

The Event: The pluck of the string. The pick or the finger movement, the velocity, the material, the pressure, the technique, the position along the string. This can be a difficult technique to teach, commonly tricky to achieve, or a natural expression of real talents.

Now the string is vibrating. Now the system becomes passive as no other energy will be introduced (except for vibrato, bending and other expressive possibilities) and the string will just gradually loose its vibrating energy depending on:

The vibrating element: The string, the material, the quality, the action, the age, the length of the string and its stiffness, the pole piece magnetic attraction and distance from the string. You know those funky bass sounds from the 70’s? Can you hear that those strings are not brand new? Or why not to mention John Entwistle brand new string sound. So that is the part of the tone made directly by strings. The string behavior will be detected by pickups and reported (with their interpretation) to the amp. That will be the audible tone but let’s leave this way and return to watch what happens to the string.

The transmission elements: Nut or frets on one side and bridge at the other side. Those elements are the key point where vibrations of the string interact with the other parts of the instrument. Material, construction, mass effect interaction between vibrating string and rest of the instrument, giving more or less sound coloration to the basic string vibration. A bridge like a folk guitar bridge (or our semiacustica or bass piezo bridge) maximizes the connection leaving a good amount of vibration going to the bridge and having back a lot from inducted vibration of the body. A Floyd Rose bridge is at the opposite, as contact with body is minimal and the mass of the bridge is the thing that mostly interacts with string vibration so the sound is more “just string”.

All elements affected by transmitted vibration: All neck and body elements and their joint, materials density and dimensions. Even springs of tremolo. This is the point that commonly refers as “sound” of a specific instrument.

One element persists in its state of quietness or movement, until an external cause change to its state. The quietness was lost at the event of plucking the string, so watch out from neighbors! The string is vibrating so now something will, someway, stops it. It will be stopped by friction with air (you can’t do anything about it), and then from vibrating parts of the guitar that will absorb vibrations and reflections. The elements of the vibration of the strings are pitch, level, envelope (length), tone that is an expression to define the fundamental plus the other various harmonics that blends together. A rich high harmonic content would produce a harsh, metallic sound while a pure fundamental would give a clarinet like tone (similar to sine wave sound). You know how to vary the level and to vary the pitch you have various frets or a whammy… Let’s take a look to envelope and tone.

Envelope: the time length of the vibration and its progressive level reduction, directly depends on masses introduced to vibration and inversely to dumping factors. To understand it imagine a pendulum movement. There is a mass of the pendulum (the more it weighs, the more it will go on) and a friction (a dump) in the upper hanging point (the less the friction the more it will go on). The vibrating masses (such as headstock, neck, body, bridge) interacts with themselves and with string in a very complex way, very hard to control precisely. It can help to follow the right to achieve the expected results but we can consider some masses more or less important and active than others. The dumps are also on transmission elements and on the neck-body joint. All parts that absorb vibration will cooperate to dump vibrations. Think about a biscuit dobro. The strings directly pass vibration to a cone that creates acoustic sound. All the energy goes to the energy consuming acoustic wave formation. This happens in acoustic guitars too, so that’s why acoustics naturally have less sustain that solidbody. A spider dobro passes more energy to the body so the sound is not so loud but more complex and affected by the body. So to get a credible acoustic envelope, the sound should be dumped to simulate this acoustic wave creation. We used this idea in developing our Semiacustica, putting a gum block under the bridge… it works!

Let’s go back to the attack of the envelope. For an inertia effect I can imagine that the more the mass will be, the more it will take to let it vibrate, and the more it will take it to stop. In sound result I can imagine sound will be a little compressed on the attack and will have longer decay, with more “pure string” sound if more masses are added. Mass means density and dimension. So in a guitar will be both important which wood you use (light or heavy) but also how much. How much depends on the shape. I would say you have similar effects on envelope with similar mass but …it’s not true as density and features of wood affect it.

An hypothetical visual image help me to figure out how it works: a tuned string with at the two ends two enormous blocks of marble all suspended as a stand-alone system. Then, another similar tuned string with at the two ends two small red jellies. The first string, if plucked, would vibrate “’till the end of time” (thanks Jimi), as blocks do not even start to vibrate, no energy will be transferred to blocks, no interaction between string and block will happen. That would give a completely “pure string” sound. The second string if plucked will instantly stop as vibration would completely be absorbed from jellies. This sound would be a “swosh”, completely dead, exactly opposite to “pure string sound”. These are the two limits. In between there are all the other situations where interaction between vibration of the string and the vibration of masses would happen, with different inertia effects and envelope affections on all the frequency bandwidth, that determine the tone. Certain frequency will resonate in certain masses helping them to sustain them too.

Tone: is the effect of all in-between situations. Let’s say it again: there are so much variables and uncontrollable factors that the best way is strongly Empirical. But trying to figure out “how it works”, it is one of the human’s first sport. There are two aspects, construction system and dampening.

Construction: I started building instruments with the neck-thru system in the 1987. I still make the neck-thru Custom model on request sometime. The sound of the neck-thru is different. I remember I spoke with Holdsworth in those days and he told me that neck thru is more “pure”. This was not expressed as a plus as too “pure” means less intriguing, more or less like what commonly happen with women… Some years passed, I know more about women and, after I did bolt on and set-in I realized why the neck thru is more “pure”. Neck-thrus have single pieces of woods running from headstock to end of the body. This means that the wood can vibrate with the same length than fretted notes in this case would be fundamental. Especially on basses this fundamental boost is evident giving a full fat sound. But as always happen, sometimes this is not so desirable as the bass sound maybe can lack of definition between all other instrument. Sometimes a very bad sound listened alone, is very effective together with the band. I remember a Frank Zappa tv show with a silly bass sound with an incredible orchestration. The silly stand alone sound was perfect, audible and effective among a so full global sound. Now, if the neck is bolt-on, there is a point of fracture that should break the vibrations, so body and neck will vibrate separately with shorter lengths, giving a more high overtone boost. With set-in neck will be in between mode maybe more oriented to neck-thru, depending on type of joint. All these construction sound properties are better heard on light instruments where participation of body-neck vibrations are more evident.

Dampening: There are two types. One is due to sound produced (acoustic wave creation) and one is due to internal molecular friction that lets the material opposite to vibration (the difference between marble and jelly). The less energy frequencies are the highest, so these will be the first frequencies that will be absorbed. The audible effect using a softwood is a high frequencies reduction.

So what you hear from the pickups is a complex result: maybe is some “pure string tone”, (very high frequencies) due to a heavy steel bridge with narrows contact with the body and avoids transmission, but maybe the sound is warmed by very light body absorption of highs. A big body with a heavy headstock anyhow can give some sustain, so tone combinations are infinite and not so easy to control.

It’s fun to talk about this in an analytical way, but after all, a guitar is a guitar.

You have to look at her, to embrace her, play her and feel how she responds. Maybe she will give you “good vibrations” so you will know that you like her.