Following Sensory Records’ worldwide release of ReEvolution, the second full-length from progressive metal outfit CYNTHESIS, the band this week unveils a new mini-film on their initial inception and the concepts behind the album. The short documentary was filmed in multiple locations, as the majority of the group — guitarist/keyboardist Jasun Tipton, vocalist Erik Rosvold and drummer Sean Flanegan — still inhabit their origin of Pleasanton, California, while Jasun’s brother Troy currently resides in Moscow, edited and produced by Wayne Joyner of The Ghost Network.

Tiptons are on tour this month hitting the West Coast with the AMAZING INTO ETERNITY! Looking forward to seeing many of our West Coast friends at the shows 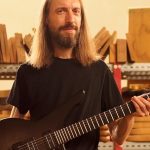