“We all have defining moments of our lives, where goals are achieved, where dreams begin to come together, where our hard work and patience finally pays off. But the stories, the journey, of how we got to those defining moments are often what makes those moments so special. Sometimes you rely on skill, sometimes hard work, and sometimes a wild prayer is answered with a stroke of luck. My journey to fulfilling my dream of being a professional musician has been filled with some truly epic memories, and some of my favorites involve my association with Manne and the perks of owning my collection of instruments that make me look great and sound even better.

My name is Steve Schlinkert, 24 year old musician out of San Jose, California, and a die-hard Manne player for 5 years. My relationship with Manne started with a simple suggestion from Zero Hour’s Tipton brothers, and it’s only grown over the years.

There are a number of things that one can learn from Troy and Jasun Tipton of Zero Hour. First, and foremost, they can truly shred. Their dedication to their craft, and commitment to overcoming any obstacles in their way, has always served as an example to me of how to conduct yourself if you want to be considered a true professional, regardless of profession. Second, they both like to give back – That’s how I met the brothers. Troy had heard of me through a mutual friend when I was 18 years old, went out of his way to invite me to his rehearsal studio, and effectively took me under his wing. The day came when I was looking to upgrade from the run-of-the-mill bass that I was using. I looked at Tobias, Rickenbacker, Fender, and pretty much any brand name you can think of, but I was at a loss. Nothing seemed to fit what I was looking for. I told Troy that I was looking for something different…Third, the Tipton brothers arm themselves with only the best – Why settle for anything less?

He handed me his Manne Newport. My mind was made up right then and there.

5 years and 3 custom instruments later…I made the right choice.

My first Manne instrument was a 5-string Newport. I was blown away when I received it, and 5 years later, it is still among my most prized posessions. Some would say that the true sign of greatness is standing the test of time – From great tones to the eye-catching looks, my oldest Manne is passing the test of time with flying colors. Always a crowd pleaser.

In fact, my first Manne instrument was met with so much enthusiasm everywhere that I took it that I decided one Manne wasn’t enough and explored my options. I wanted something special, something very unique. I talked to the folks at Manne and they encouraged me to be creative with what I wanted. My second Manne instrument was my blue custom Newport AXS, a 4-string 29-fret beast that exceeded my already lofty expectations. This is my weapon of choice. My AXS has dropped jaws with it’s looks, but the pictures don’t do justice for the quality of the sound. I’ve found that my AXS helps to provide the perfect combination of the aggressive punch and warm tone that I’m looking for, and it doesn’t hurt that the looks draw some much needed attention to the bass player for a change. Over the years, my AXS has taken on a life of it’s own and turned into a show-stopper of sorts whenever I’ve brought it out. It’s a pretty unique feeling to get a crowd buzzing just at the sight of an instrument.

As time went by, I started to get my feet wet with playing guitar. I was stuck just occasionally playing guitar for a while until (you guessed it) Jasun Tipton heard me fooling around with the idea and, like his brother, offered me a number of pointers, encouraging me to take playing guitar just as seriously as I took playing bass. What can I say, yet another Tipton brother showing me the way. I was playing on a simple Ibanez when I decided that I was good enough to justify a major upgrade. I gave Jasun’s Manne a test drive of sorts and decided that it was time to add a 3rd instrument to my collection. I opted to get a Taos, and the result has been one of the funniest instruments I’ve ever owned.

When I was coming up with ideas for the AXS bass, I decided to go with a similar custom paint scheme as my first Manne bass so that I could have a unique ‘collection’ of sorts. When it came time to get my Taos, I wanted to keep the same custom paint theme as my previous two instruments. Now, I have 3 instruments that anyone with semi-descent vision can tell were designed by the same person.

As my career has progressed, I’ve decided to add one more weapon to the arsenal. A fourth Manne instrument is on it’s way, and this one is sure to be special – A double-neck fretless 5-string bass and 6 string guitar. Be sure to stay tuned to see what the Manne guys come up with next” 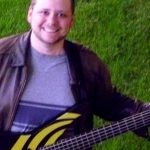 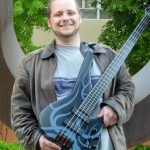 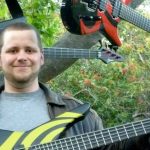 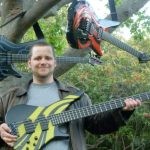 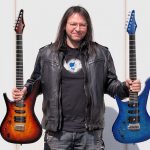