“No knobs, no switches. Play me, scratch me, live me!

I wish for a guitar that was a bit like me in its voice and personality. Ready to be scratched and to live fully.

As a home-player, I started looking around, testing a few guitars, but I never got the right answers.

I set them apart, I modified them, moving pickups and controls, trying to get near my idea of perfection.

I wished for a headstock like that but with the neck in another way. The strap pin was never in the right place, not to mention the output jack that was never where I want it to be.

The string to string measurements were fighting with my fingers.

I found myself mostly jiggling around the guitar instead of actually playing it .

So I will get to a point: The guitar must have just a single sound, but it should sound good!

And further, it should be comfortable while seated or standing.

So the result was a prototype I developed. With no controls and with a customized pickup layout. But it was a Frankenstein of something that should work fine, sound good and be nice!.

So one day I went Manne to explain my project . He tested the Frankenstein guitar I had set up, and he turned it into a concrete project using his skill and experience.

I told him again. “I just want this and just live and play it!”

The outcome is astonishing and surprising. I mean for Andrea too…

He wrote me: “I finalized your guitar, it is frightening… good”

The pictures of the guitar show the manufacture and the beauty but you must listen to it live to fully appreciate that its tone and sustain are no less than its beauty.

It’s an electric guitar that plays a lot acoustically, with a so natural sustain.

That is, I think, due to the small-shop technical particulars that Andrea put into the project.

For clean tone is very very nice, and in distortion, with strong violent picking, it sounds like there is a compressor that holds notes up the strings vibration.

Finally a guitar with my idea, my sound……my guitar came true!

All this thanks to him….he who makes guitars a reason for life. Compliments to Manne!! 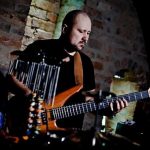 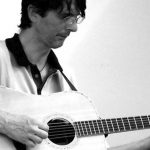