Recently there was an interesting article in Premiere guitar magazine on neck-body construction and a corresponding sound features comparison.
https://www.premierguitar.com/articles/25363-bass-bench-can-you-hear-the-difference-between-different-neck-joints

The focus of the article was mainly on the “sustain” factor.

To me the approach makes a nice header title but does not tell the whole story. The term Sustain is very general and does not really specify the “usable sustain”. If we take a long rock note like the bass of the Stairway to Heaven arpeggio, is just 1.5 seconds long. Very seldom long guitar notes are the originals plucked without feedback resonance.

So the guitar building methods, to me, should be described as “fat attack”, “long attack” or “fast attack”, “compressed attack” and so on, more than actual sustain (in 10-20 seconds?) which doesn’t mean much. So a more accurate description should define what the article wish to express by term “sustain”.

To me, once again, it is a matter of dynamics mostly. Sustain is important mostly within the first two or three second of a sound which represents the most used part of guitar sound. So you can call it sustain of the attack. Then it is the tone the more recognizable feature.
I did several tests like the one described in the article, but my focus was mainly on the envelope of the sound, the nature of the attack and analysis with an overtone analyzer to look for some tonal feature that could be related to construction methods.

In 2010 I did some experiment similar to those described in the article, I wish to share briefly. You can see in the video the system I built to get an even plucking, to have always the same pick on the string, that then you can compare. 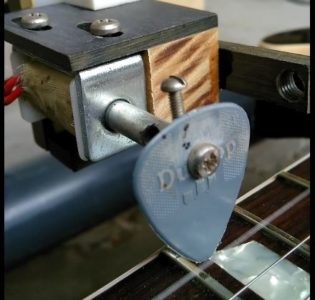 One of things I found, is that the fundamental tone of the vibrating string is always more pronounced, in the first second, with bolt-on construction. Neck-thru construction results in a slight more lower harmonics content (3°-5°). Bolt-on construction results in emphasized slightly more on higher harmonics. In not necessary to do test like these to know that, but what I was looking for is guideline that gives a better perspective on it, like I did for effects of chambering

Regarding of the sound envelope, the overall sound has a reduction on the bolt-on just after 0.5 second, while on neck-thru the decrement is more linear and even. 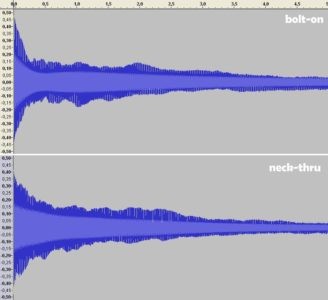 The behavior of the two system shows the fact that one piece is a single mass which can interact with vibrating strings symmetrically. I imagine it as being that the structure can have the same length of the vibrating string, while the bolt-on two pieces, even if well connected, creates two systems and a different result of breaking the vibration it two sections, so with higher harmonics.

On real bolt-on necked guitars, compared to test samples I did that were all in maple, usually the neck and body are made of different woods, materials with different acoustic impedances, a fact that inhibits transmission of vibrations (and favor reflection) and enhances the differences of the two building systems.

So I think it is better to focus the interest on the features that give players more advantages and inspiration, rather than just “having a longer sustain”.

I remember a player that came looking for fat tone from a short scale Manne Blackbird. I had two available to test, both with the very same features, hardware and pickups, except one was built of very light weight White Limba which imparted an airy acoustic tone, and the other, just the same but made from heavier Black Limba and a dense poplar top, which imparted a ballsy, full, solid tone quality. I knew that the heavier would be fatter sounding, so I suggest that to him.

He tested both, but he liked the lighter one.

The reason? His style was a fast, funky, popping shred. He needed a quick and fat attack, a response that the lighter guitar provided. The heavy one had a more compressed attack (due to greater mass), which provided no advantage to this particular player. 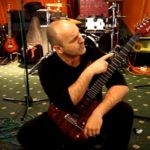 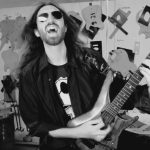